How can robots assist an economy in a period of inflation? 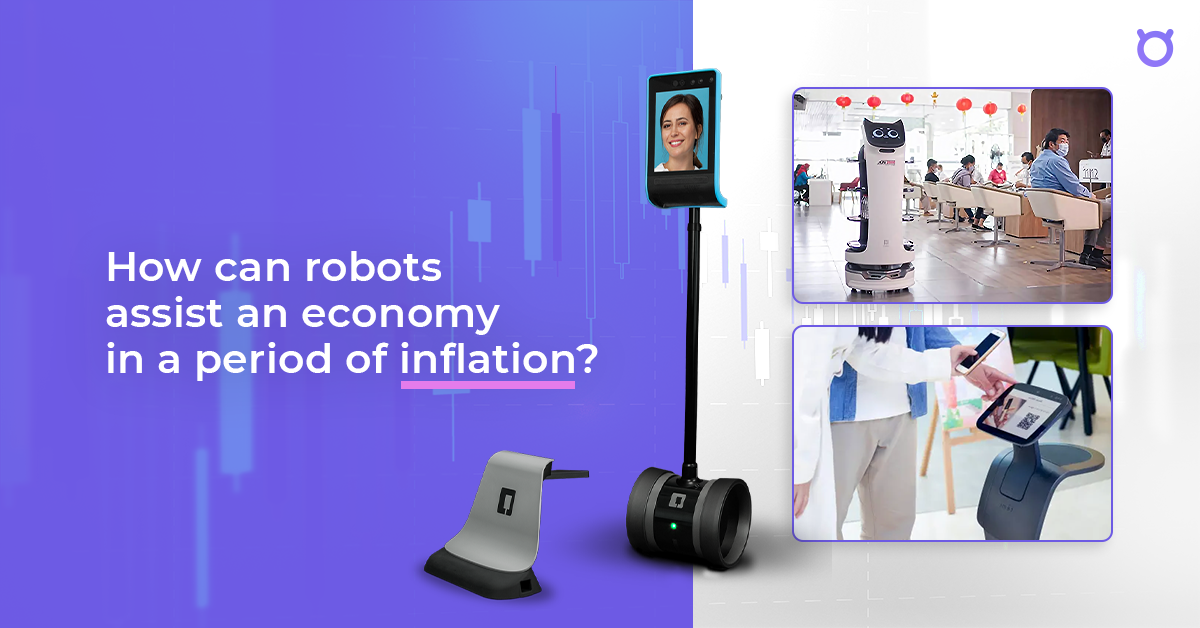 According to the World Economic Situation and Prospects, as of mid-2022, while the world economy is still recuperating from the pandemic, it may be on the cusp of another crisis, i.e., increasing global inflationary pressures. Some businesses have been impacted, while others have tried to quickly adapt to new business realities after nearly two years of battling the effects of a worldwide pandemic. However, the pandemic significantly altered consumer and company behavior, and as a result, demand for robotics and automation technology has increased dramatically in a number of end markets.

The future of the workforce is being revolutionized by robotics and technology as they help businesses to expand by making data-driven and informed decisions. Companies are leveraging every advantage to cut expenses, with inflation at 7.5%, to stay afloat in the market competitiveness. In such an inflationary period, robots might be a savior for many enterprises. How? Read on.

Labor challenges are currently being presented by the backdrop of rapid wage inflation in several sectors of the global economy. Increased wages and labor shortages may also impact many other areas of the economy. The US Job Openings and Labor Turnover Survey indicates that about 11 million positions are currently advertised in the US, up from the 6-7 million averages in the years prior to the pandemic. The high number of job opportunities suggests that businesses seek employees but are having difficulty filling the positions.

Additionally, the pandemic significantly strained the world's national healthcare systems, and several nations have acknowledged that long-term under-investment in healthcare infrastructure has occurred. Many governments will focus heavily on efficiency and technology as they examine healthcare services, and robotic surgery and digital health are two areas poised to benefit from them.

Related article: How are robots adding value to the medical industry?

How can robots assist an economy with inflation?

Inflation can have a variety of negative repercussions on an economy, including a decline in people's purchasing power and firm closures due to weak demand or profitability. Both individuals and businesses can work together or individually to combat these effects. On the organizational front, robotics implementation in the industry could result in more high-skilled job opportunities. It will raise productivity at work and assist employers in maximizing employees' working hours. Additionally, it will support and permit overall economic growth and, in challenging times of inflation, even boost its GDP. Let's take a more detailed look at the advantages one by one.

Increased productivity, capital, and labor quality can contribute to economic growth. Robotic integration in the workforce automates manual and tedious jobs and frees up the working hours of an organization's skilled employees. This enables experienced workers to concentrate on more complex tasks and helps the entities maximize the operating hours of their employees. As a result, it raises an organization's overall worker productivity and aids in lowering its high labor costs during inflationary periods. Reduced overheads will allow the companies to maintain their margins through price increases, preventing them from going out of business due to the potential threat of loss-making.

Furthermore, technology facilitates businesses' expansion because it eliminates the need to continue hiring more employees to meet their growing needs. Companies seeking to maintain their break-even and profit margins in an inflationary period can grow or diversify their product offerings or business models to increase revenue without adding to labor costs.

An economy that is facing high inflation can have a negative impact on employment. There has been widespread debate about the future of employment and jobs with the integration of robots. Automation and robots are often portrayed as 'job killers,’ with automation taking on a more prominent role today. However, it is not borne out by the facts. Research indicates that robots enhance and augment labor rather than substitute it, thereby raising workers' quality of work and wages. Robots are pushing up demand for workers at the higher end of the skill spectrum, which positively impacts wages. Technology also paves the way for lower-income and middle-income earners to upgrade their skills, enhancing quality and overall market competitiveness.

Improved business productivity with robot integration will significantly contribute to the overall GDP of the economy as well because of the low output produced with limited resources. Several studies also support this statement. A paper titled 'Robots at work' by the London School of Economics revealed that integrating industrial robots across 17 countries helped to improve the GDP by 0.36%.

Ultimately, robots and autonomous systems could provide significant economic benefits; one study projects that by 2030, boosting robot installation by 30% will add an extra $4.9 trillion to the world economy. With a massive variety of companies involved in robotics, the sector remains vast and offers many opportunities, all bolstered by numerous long-term structural trends.