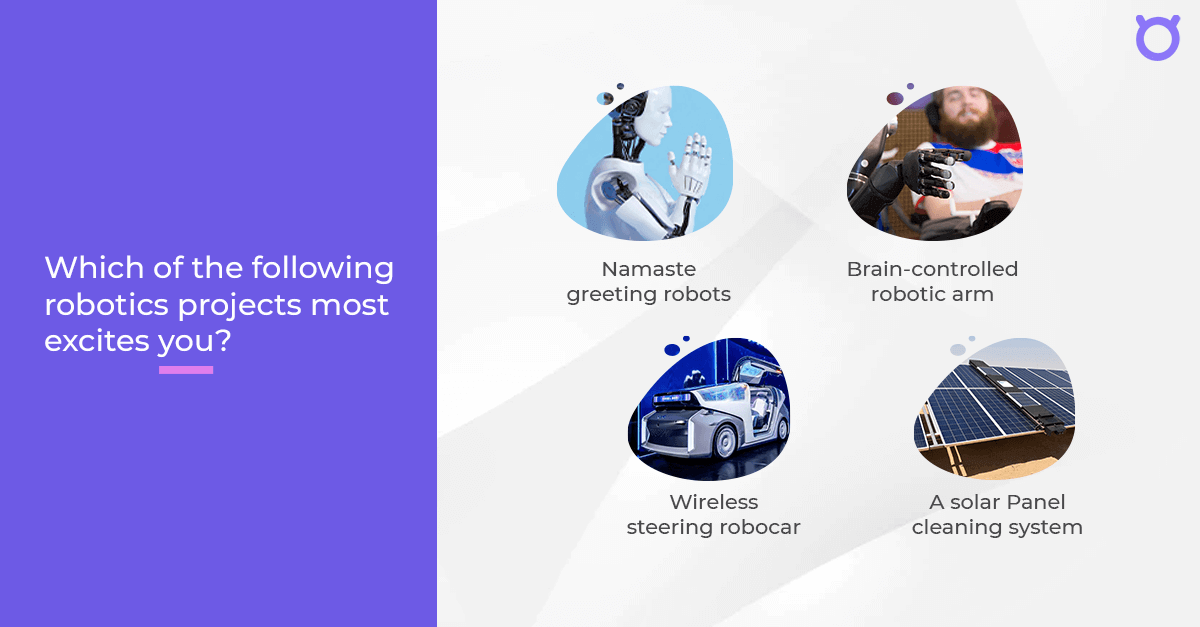 There are an endless number of things to discover about robotics. A lot of it is just too fantastic for people to believe

Technology, including robotics, is constantly evolving, making work more efficient, effective, and reliable. In today's world, robotics is one of the most advanced technologies being leveraged in various industries, including healthcare, defense, education, and many more. The technology primarily deals with designing, operating, and applications of computer systems used to control and inform processing. Automated machines that are particularly useful in manufacturing items, doing repetitive jobs, and many other things, are also parts of robotic technology.

Mind-controlled robots have long been a staple of science fiction, but new research in brain-computer interfaces (BCIs) has made them a reality. This robotics arm features an inbuilt controller that controls the servo motors and performs the PID algorithm for adjusting the angle of the DC motor. It also includes a communication interface to receive commands over the serial port for altering joint angles.

Mathworks MATLAB programming language is used to implement forward and inverse kinematics techniques. They run on a companion computer with a serial communications command interface that connects to the embedded controller. The MATLAB code also includes a Graphical User Interface (GUI), which allows the user to manipulate the robotic arm and run the forward and inverse kinematics algorithms from a single screen. In real-time, a 3D simulation/visualization of the robotic arm is displayed in the GUI.

This robot comes with a roller brush and a water sprayer to clean the panels' surfaces of dirt and grime. Water is supplied to the sprayer through an onboard tank. This robot can stick to the smooth surface of solar panels thanks to the rubber caterpillar tracks. This robot works remotely and wirelessly.

"Namaste Greeting robot," a fun project with the concept of controlling various servo motors with an Arduino Uno board, is introduced. The robot rotates its head 180 degrees and uses an ultrasonic module to scan anyone within its range. If it sees someone close, it greets them with 'namaste,' which is the traditional Indian greeting of both palms pressing together. The robot can be used to greet and attract people in places like offices, retail malls, parks, and party halls.

The accelerometer detects the steering movement of the Robocar. An Arduino Uno board processes the data from the accelerometer, and the RF transmitter transmits the corresponding commands to control the robot. The robot receives the commands, and the MCU part controls the motors in accordance with the commands. Obstacle detectors detect any item on the road and alert the microcontroller, which causes forward motion to be halted.

The Line Follower Robot simply follows a path given by a line of a specific width (typically a black line on a light-colored surface). The essential components of this circuit are two 8051 microcontrollers, two IR sensors, motors, and a motor driver IC (embedded in a module). The outputs of the two sensors determine the robotics' motion direction. The robot travels forward when the two sensors are on the path's line. The robot travels to the right if the left sensor moves away from the line.

The project is aimed to build an autonomous robot with an RFID application by integrating an RFID reader and PIC microcontroller as the main components. By reading the products' tags, the robot can identify them. The robot will pick up the object and use a line follower module to navigate to the specified destination, where it will be stored in the proper area and location.

We will end this article with another entertainment project named Soccer robots. The soccer robot can move in all directions thanks to an accelerometer on an Android phone. The phone's speed is controlled by the angle at which it rotates. Shaking the phone also causes the robot to kick a ball. The Arduino UNO board is at the heart of the circuit, and a servo motor, Bluetooth module JY MCU BT, motor driver, and two DC motors are among the other components.

Keep looking at the space for more interesting insights into the world of robotics.